Skip to Main Content
Home > What We Do > Program Areas

Children’s earliest experiences have long-lasting effects on their optimal development and potential to succeed in life. Research shows all children benefit from high-quality early learning programs–programs with proven effectiveness factors including warm interactions with qualified caregivers and teachers who are culturally and linguistically responsive. However, not all children arrive at school with the skills and knowledge they need to succeed. Research shows children who enter school behind tend to stay behind while those who enter school properly prepared are 10 times more likely to meet third grade state standards.

First 5 county commissions, county offices of education, and other partners have partnered with First 5 California and the California Department of Education to develop a quality rating and improvement system (QRIS) — a framework to guide the state’s early learning improvement efforts. First 5 California’s funding through First 5 IMPACT (Improve and Maximize Programs so All Children Thrive) supports more settings to achieve high-quality standards with proven effectiveness factors, engages more families in the early learning process, and helps ensure more of California's children enter school with the skills, knowledge, and dispositions necessary to be successful. To that end, the First 5 California Commission approved $190 Million is funding to support First 5 IMPACT. Currently, 48 Lead Agencies (which includes all 58 counties) are participating in the multi-year program. 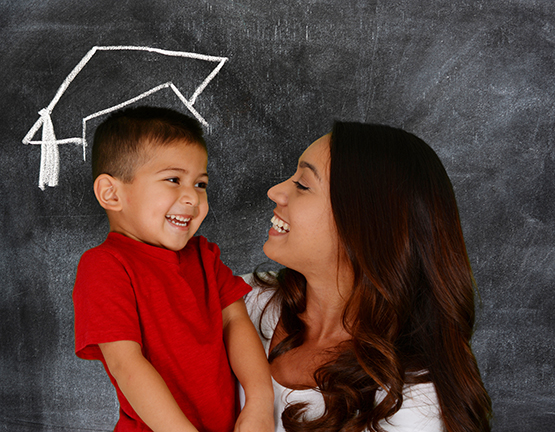 First 5 California has funded programs and research to improve the quality of early learning programs:

Many factors contribute to a child’s development and learning, including individual characteristics and family and neighborhood experiences. Among school and early learning program related factors, effective teachers matter most, especially for children with high needs. Children with high needs who experience high-quality early learning opportunities with effective teachers are proven to be more likely to earn higher wages, live healthier lives, avoid incarceration, raise stronger families, and contribute to society.

First 5 California is dedicated to supporting teacher and provider effectiveness and high-quality early learning programs for children from birth to age five by providing professional development and coaching to support effective adult-child interactions, and support to meet standards for educational qualifications. 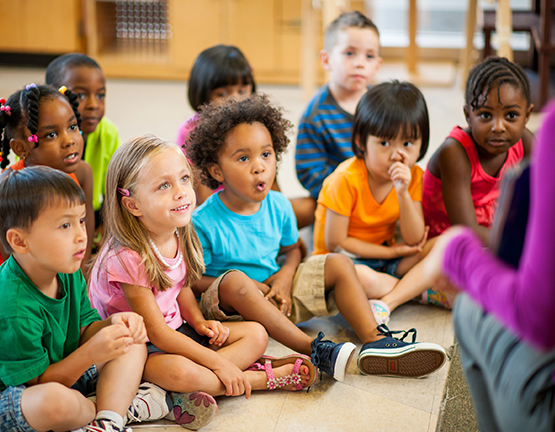 Families are their child’s first and most important teachers and role models, with critical relationship building and brain development occurring in those first few years. Yet, studies continue to show that many parents and caregivers have limited understanding of the importance they play in their child’s learning. How parents engage with their children is a more powerful predictor of their child’s success than other family background variables, including income, family size, and level of parental education.

However, too many of California’s families with young children are coping with enormous stressors that interfere with their ability to parent effectively, such as poverty, housing instability, or social isolation. Times of crisis can cut off families from essential family and community support systems, and as a result, deeply affect a child’s early development. 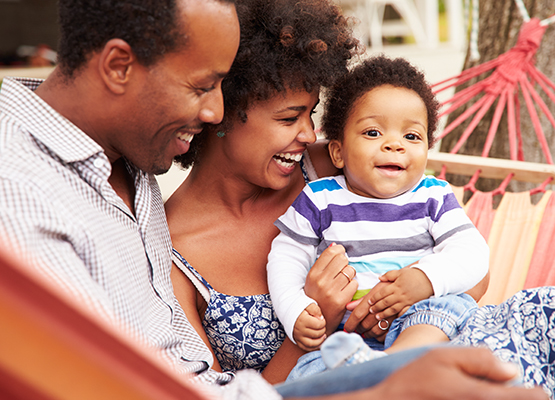 Parents are the primary role model for young children. Parent-child interactions during the first five years of life affect all aspects of development: cognitive, social-emotional, and physical. First 5 California has addressed positive parenting by a media campaign and research.

First 5 California is dedicated to ensuring the health and well-being of children ages 0 to 5, and that starts even before they are born. According to the Surgeon General, smoking is the most preventable cause of poor pregnancy outcomes in the nation. Nicotine damages fetal brain cells making learning, attention, and behavior problems more likely as children grow. Infants exposed to tobacco products are more likely to be born small and preterm, and are three times more likely to die of Sudden Infant Death Syndrome (SIDS).

Despite having the second lowest smoking rate in the country, over half of California’s children are exposed to tobacco smoke. This second-hand smoke is especially dangerous to babies and young children because of their developing lungs and is linked to increased diseases including asthma and ear infections. While you can’t see it, third-hand smoke is a toxic residue that lingers and sticks on surfaces–from people’s hair to clothes to curtains, carpets, and furniture–long after someone has stopped smoking. Babies and toddlers are especially prone to damaging exposure from crawling on the floor and putting things in their mouths.

Even e-cigarettes aren’t safe around our young children. On average, there is enough nicotine in 45ml of e-cigarette liquid to kill 10 children if ingested. E-cigarette use among young adults in California tripled from 2.3% in 2012 to 7.6% in 2013, and e-cigarette consumption could surpass conventional cigarette use within the decade.

First 5 California invests in the California Smoker’s Helpline to provide resources and support for pregnant and parenting caregivers of children 0 to 5 to quit smoking. These nationally proven resources include counseling services and educational materials translated into multiple languages about the dangers of e-cigarettes and health implications for children and families.

A child’s brain develops more rapidly during the prenatal period and first several years than any other time, making the detrimental effects of second-hand and third-hand smoke more profound. First 5 California funds tobacco use cessation efforts.

Public education and outreach is one of the primary functions of the California Children and Families Commission. In fact, the largest percentage of funds (six percent) from the California Children and Families Trust Fund to First 5 California (state level) is allocated to a Mass Media Communications Account. These funds must be used for expenditures for communications to the general public using television, radio, print materials, and other innovative forms mass media on subjects related to and furthering the goals of Proposition 10.

Talk. Read. Sing.®. is a statewide public education and outreach campaign funded by First 5 California. The purpose of the campaign is to educate parents, caregivers, and others who interact with our youngest children about the importance of the brain development that takes place in the earliest days, months, and years of a child’s life. This critical brain development and growth is greatly enhanced through regular, ongoing language verbal interaction and engagement with caring adults.

Key activities that work to build and exercise the developing brains of babies and young children include talking, reading, and singing in safe and caring ways. These engaging activities result in billions of neural connections that form in the brain – in tandem with foundational parent-child bonding – during these early months and years.

This critical engagement can put children on a trajectory for lifelong success, and significantly reduces the risk of dropping out of school and getting into trouble later on. Those young children who are talked with and read to regularly throughout the first four years of life will have heard a staggering 30 million words more than those children who were not positively spoken with, read to, or engaged with during those early years. This means that when they start school, those children who have come from language-rich, positive, and engaging environments have a much larger vocabularies and a significant advantage over those children who have not. These disparities in language development and vocabulary growth are of great concern, but they are preventable through strategic outreach and information provided to parents and caregivers early on – which is the purpose of the campaign.

In March 2014, First 5 California launched the first iteration of the Talk. Read. Sing.®. campaign. The campaign messaging, along with critical information on early brain development and recommended parent activities for talking, reading, and singing with their children, is delivered across California through a multi-media approach that includes television ads, radio spots and interviews, a parent website, social media, digital media, sports team promotions, and blogs. The messaging has been provided in multiple languages (15 in total), including specific targeting for hard-to-reach populations.

An evaluation of the campaign conducted by NORC of the University of Chicago revealed a significant impact of the campaign on providing parents with valuable information and influencing their interactions with their children in positive ways.

The newest iteration of the Talk. Read. Sing. It changes everything® campaign includes a vibrant mix of live action, showing parents engaging verbally with their young children, combined with an original song and some fun animation. Our three new animated ambassadors (a talking parrot, a reading owl, and a songbird) continue to reinforce the three important engaging activities parents and caregivers need to do with their children every day to ensure strong brain development – starting from birth.

The new ads took flight February 27, 2017, across a variety of multi-lingual media, and will continue throughout the year. The ads are bring broadcast on TV, radio, online (including digital ads, social media, including the First 5 California Parent Website), and on resource materials distributed on the First 5 Express. 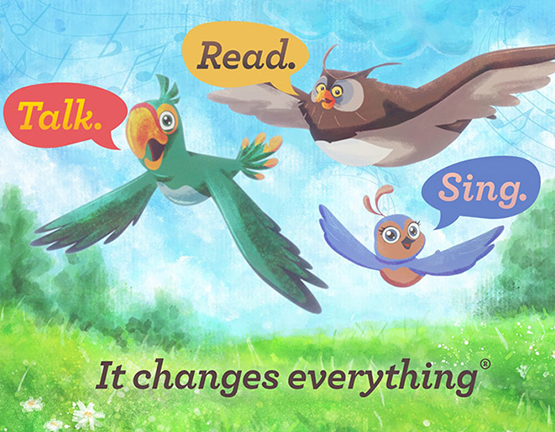 Another First 5 California flagship program to inform and inspire the public is the Kit for New Parents. Since its initial release in 2001, more than 5 million Kits have been distributed in partnership with First 5 county commissions.

The Kits provide helpful information and resources for the well-being of newborns that new parents can have at their fingertips. Most of the Kits are sent home from the hospital with new moms.

The First 5 Express is First 5 California’s traveling public education and outreach exhibit that visits all 58 counties in the state during any given year. The Express provides an opportunity for in-person engagement, educational activities, and communication of targeted messaging with young children and their families all over the state.

The Express currently serves as the premier hands-on experience for Talk. Read. Sing.® education and one-on-one interaction. It provides parents, caregivers, and teachers with information, tools, and motivation to carry out talking, reading, and singing at home. 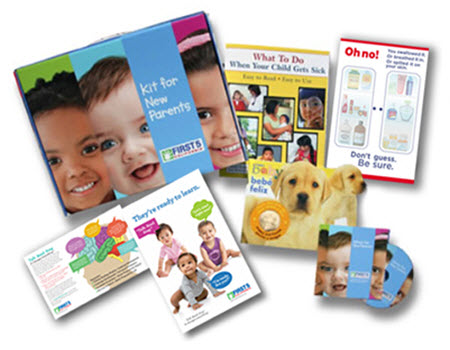 First 5 California is a partner in a statewide systems change effort based on recommendations from the Institutes of Medicine and National Research Council’s report: Transforming the Workforce for Children Birth through Age 8: A Unifying Foundation.

First 5 California, building on the goals of our Strategic Plan, created a Town Hall Toolkit that enables First 5 county commissions to plan, create, and execute a town hall-type event designed to build public will and investment within with local and state partners within their communities. 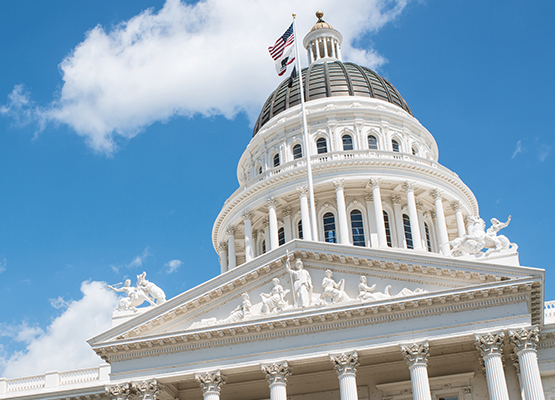